On November 24, 1967, I was at Pensacola, FL. I had checked in at the Marine Corps Training Command on November 20th and had been assigned to go through Ground School at Mainside.  I had been with a bunch of Marine Aviation Students running the sea course, when a Marine Officer came to our gaggle of hard-breathing, burr-headed sand runners and asked for me.  I knew what had happened, and it saddened me.

I had graduated from OCS at Quantico, VA on November 9, 1967 and awarded my 2nd Lieutenant’s Bars. In fact, my fiancé and my father pinned my bars on my shoulder epaulets and we all flew back to Pine Bluff, AR that afternoon.

On November 17th, Nancy and I were married by my father in Pine Bluff. Nancy and I left and visited my Grandfather, whom I called Doc, in Birmingham on our way down to Pensacola. He was dying of cancer and didn’t have long to live.  He had been in the military during WW I and had fought in the Meus Argonne Offensive as a member of the famed Rainbow Division.  I visited with him about a day and then we had to go to Pensacola to check in to the Aviation Command.

When the Officer asked for me, I knew Doc had died.  The Officer, who I believe was a Marine Captain, got me in his car and drove me to the Marine Corps Training Building. I was very self-conscious in my short sleeve Marine Corps t-shirt, red running shorts and tennis shoes.  I stood at attention in the hallway waiting to be given an emergency furlough to attend Doc’s funeral.

All of a sudden,  a giant of a man in Marine Corps Uniform came out in the hall and saw me. He looked at me intently, and with a hardy laugh bellowed, “ Hey Tiger, how’s it going.” (or something to that affect. I definitely remember the “Hey Tiger” comment.) 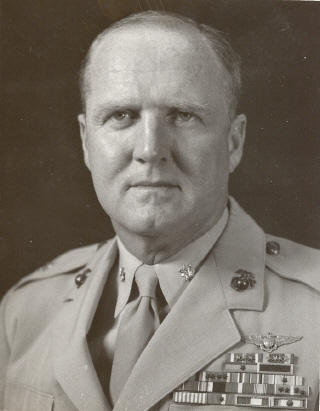 I remember he had a name tag that said Conroy on it. (A bit of background-when Marines are attached to a Naval Command, they wear name tags. When Marines are attached to Marine Units, they don’t wear name tags.) This guy was huge, at least 6’2” and broad chested. He has more ribbons on his chest than I had ever seen, and I could see that he had the insignia of a Full Bird Colonel.

I tried to melt into the wall. To be singled out by someone of his rank is scary.

I sort of stammered that I was being processed for an emergency furlough due to death in the family. As I remember, at that point, I was ushered into the S-1’s office and began the lengthy paperwork for the furlough.

I had just experienced “The Great Santini.” I didn’t know it at the time.

Years later, I recalled the name on the Colonel’s name tag when the movie came out, and I’d heard it was based upon Col. Donald Conroy’s life.

All I can say about the brief episode, is that Col. Conroy exuded a Bon Homme attitude that, at the time, I didn’t really think I deserved. I was just a lowly 2nd LT going thru the Naval Aviation School along with about a thousand other participants.

Anyway, from the description of Col. Conroy’s personality, I can believe it was just his normal address to a fellow Marine.

He was definitely a Marine’s Marine.